This is my last post on Another Portland Blog. It's been swell. Over the course of the past seven years, I've penned over 2,000 posts here. However, it's become apparent that my focus has shifted during the past year. This blog is no longer about Portland but rather the whole dang world.

So, to reflect that, I've decided to start an all new blog. Rather than stick with blogger.com's increasingly annoying and archaic software, I've opted to give Tumblr a shot. If you'd like to continue reading about my oddball travels both in Portland and abroad, follow me on over to....

A nifty play on words, no? OK, well, I thought was clever.

As the Finish say, ciao.

Europe in Three Minutes or Less # 8 - STICK VS. FROZEN CANAL

Life in the TWIKE lane

I met Paul a while back. You know the term "an American original"? Well, Paul's a Netherlands original.

After a dinner of fish and homemade fries at the flat he shares with his fiancée in Amsterdam, he presented my gal-pal Marie and I with a crystal candy dish filled with dried worms. They came in two flavors "original" and "nacho" and looked like the meal worms I used to feed the pet turtle I had back in high school. The nacho ones weren't half bad.

After chatting for a bit, Paul asked me if I wanted to take a spin around the city in his TWIKE. These two-person "human-electric hybrid vehicles" are relatively rare but have a devoted following. A mere 850 have been sold since the TWIKE 1 debuted at the 1986 World EXPO, mostly in Germany and Switzerland. 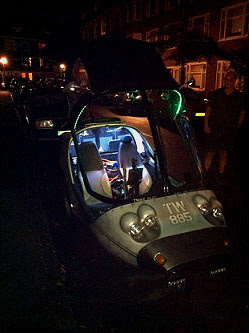 Paul has had his for a few years now and has retrofitted it with a few interesting modifications. Blue neon lights line the inside and the cargo area is set up for a small refrigerator. Paul used it to transport fresh herring from the Netherlands during a road trip to Scandinavia. His TWIKE also has a custom paint-job. At first glance, I thought Paul was shooting for the Delorean from Back to the Future. Upon closer inspection, I realized that the TWIKE was all done up like a jet from Top Gun, complete with a pair of faux-afterburners on the back.

I jumped in the passenger seat and we set off into the night. On electric backup, the average TWIKE can run for a few hours and is capable of carrying travelers between 45 and 90 miles depending on the type of battery installed. If the driver and/or passenger are willing to pedal, however, the vehicle can journey much further. In Amsterdam, they're also street legal. Paul manuvered the TWIKE onto a busy boulevard and we buzzed through the Jordaan as pedestrians looked and pointed. At almost every intersection, someone broke out a cellphone or a camera to snap a photo. As we waited for a tram to pass, a kid on a sidewalk geeked out as if he had just spotted Santa Claus in the flesh.

Paul swung onto a quiet street and turned off the battery. I had asked him how tough it was to fuel the vehicle on pedal-power alone. We gave it a shot and it was like trying to haul a mountain bike up a San Fransisco hill. After the test, Paul flipped a switch on the dashboard. "Are you ready to take this puppy onto the freeway," he asked. 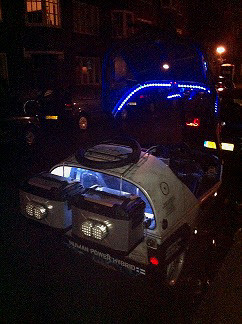 The next thing I knew, we were blasting alongside semi-trucks and SUVs. The top speed of Paul's TWIKE was 55 MPH but it can go faster at a full gallop. I figured we'd get blown off the pavement but the vehicle's aero-dynamic curves made for a smooth ride even at a fast clip.

The limited mileage on the average TWIKE renders them impractical as anything but a commuter vehicle. Even the newer models require two hours to charge on a dead battery. They also cost a pretty penny. A new model will run you somewhere in the neighborhood of $40,000 US. That said, they're a hell of a lot of fun.

Europe in Three Minutes or Less # 5: Scooters, Pornographic Tintin and a Cathedral

I think the title says everything that need be said about this one.

Trapped at the Bunny Ranch part 3: Escape from the Planet of he Ap...er, Bunny Ranch

It's been over a month since part two of this adventure. Sorry for the delay. Let's wrap this one up.

I had come to the Bunny Ranch, chatted with a prostitute and, despite the awkwardness, I had gotten what I came for: a dippy story for friends and the blog. But what was I doing in another bedroom with another prostitute? This was not my beautiful mid-size rental car. This was not Jane, the beautiful working girl who happily chatted with me about her life and the industry. I asked myself: how did I get here?

No, Veronica was not Jane. Veronica had the body of a Maxim model and the eyes of a hungry panther. Or, if not a panther, a less deadly but no less intimidating reptile of some kind. She closed the door behind me and cut to the chase.

"Yup, and all I've got on me is a hundred dollars."

"Well...there's not much we can do for that kind of money but there's an ATM back out by the bar. Fifteen minutes will run you $200. There's a lot we can get done in fifteen minutes."

She gave me a rundown. I'll spare you the details. I attempted to steer the conversation to her life but she wasn't here to be interviewed. She offered a quick bio. "I'm just doing this for a little while until I get my degree. I'm workin' on being a dental hygienist."

I explained that I was heading off to Europe in a few weeks and I was living on a tight budget. 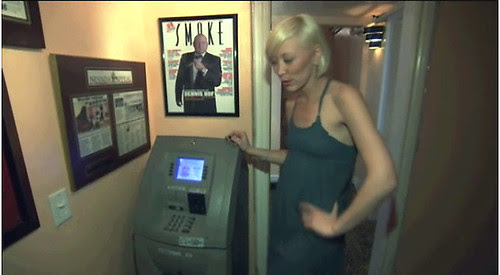 No, seriously, she said that while looking me right in the eyes with a straight face. Veronica was a businesswoman, through and through, and fully confident in the product she was pitching. Money was time and we were wasting plenty of the latter. Seeming a bit insulted, she led me back to the lobby.

Veronica bid me adieu and plopped on the couch with a sigh and a snicker. The rest of the girls burst into laughter. Good thing I ditched my ego years ago. Now it was truly time to go. I made a beeline for the exit.

Coming up the steps as I was coming down were two guys with handlebar mustaches. They looked like members of Burt Reynolds entourage circa Smokey and the Bandit Part II. Each was wearing a Ford Mustang t-shirt. "Gentleman," I wanted to say. "You're at the Bunny Ranch. The Mustang Ranch is over in Sparks. Bad form!" I can only hope they would have replied with: "Listen, douche. The Mustang Ranch was lunch. We're here for dinner! HOORAH!!"

With them was a freckle-faced teenager, maybe 18. Yes, indeed, they had brought this kid to the ranch to lose his virginity. His dad and his...uncle? (stepdad? Minister? Family friend? Kickball coach?) were geeking out over this momentous right of passage. The kid nodded at me as they headed inside, a nervous smile stretched from ear to ear.

I headed to the gate but it was locked. A small sign said "Thanks for cumin'!" in pink letters next to the latch. There was no buzzer, no way to summon the madam besides going back inside. I wasn't about to go back in there and face the line-up again. I guess it would have been interesting to see which gal the kid picked though.

Determined to find an alternative route, I marched along the perimeter, naively expecting to find a side exit in this ten-foot tall, solid steel barrier. Why was the fence there, anyway? Metal bars don't exactly scream "customer friendly." Was it there to keep freeloaders from running off into the hills? If anything, I imagine this thing would further discourage clientle having second thoughts in the parking lot. Further freon for cold feet.

There was no escaping here, not without another dose of moderate humiliation. I was trapped, pure and simple. I double-checked to make sure my ego hadn't grown back, sighed and headed for the door. The madam popped out as I was coming up the steps. "Sorry about that," she said with a chuckle. "Didn't mean to lock ya' in here or anything."

And so I was off. I had made it out of this den of seductive lionesses with my t-shirt unrumpled and my wallet unscathed. I hopped in the rental car and buzzed off to Burning Man, an entirely different (and cheaper) brand of vice in Nevada.

Anyway, in conclusion, here's Oprah's take on the ranch. There's also a video that goes with it.

Europe in Three Minutes or Less # 4:


I have no idea what to call these guys or the giant music boxes that they haul around Leiden on market days. I've dubbed them the "Hurdy Gurdy Men," even though they don't actually use hurdy-gurdies. Just roll with it. 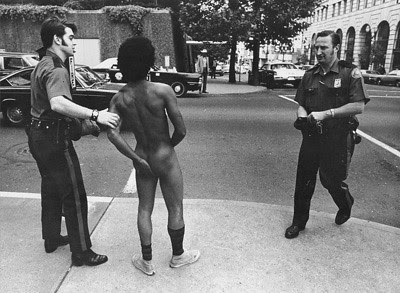 The father of my friend Cory once worked for the PPD. That's him on the right. This photo was taken sometime in the '70s. The gent in the socks? A rather daring public masturbater who was caught in the act on what was, hopefully for him, a warm day in downtown Portland.

Cory's mother recently found this shot in her attic. It's definitely something that belongs in a family photo album.

I've been there before and so have you, no doubt. You're at a show, perhaps even up front a few feet from the band, when two people next to you decide to hold a conversation. They're completely oblivious to the music and, despite the fact that they're shouting to be heard, are behaving as if they're passing time in a cafe. Their motivations are unknown and their reasoning is oblique. Where are they there? Why did they pay for a ticket and all the annoying fees that go along with it just to ignore the performance? Do they really, really need to bitch about their boss rightthatbloodyminute?

Either I'm a magnet for these people or they're far more prevalent than I've previously surmised. These chatterboxes have tarnished plenty of nights at the Crystal Ballroom and the Roseland. I've stopped going to acoustic shows entirely. There's just no point.

Is this just a Portland phenomenon? Is there something about the city's venues that work like the Blarney Stone?

This strange behavior is also a common occurrence over here in the Netherlands. The crowd at a September Josh Ritter show at the Paradiso in Amsterdam was well behaved but a group of Dutch guys were so obnoxious during an acoustic portion of Delorean's set in Haarlem earlier this month that the lead singer cut it short. Tift Merritt, a singer/songwriter who opened for Iron and Wine last Tuesday in Amsterdam, became visibly riled by talkers during her set. She complained to Samuel Beam backstage afterwards. During Iron and Wine's performance, he demanded that the crowd apologize to her. "All together now," Beam disdainfully announced. "SORRY, TIFT!" The audience begrudgingly went along with this.

That's not to say that crap behavior at shows is limited to talkers. There's also people who spill beer all over the place and those who film everything on their iPhone with the screen as bright as possible. Oh, and there's my personal favorite: sweat-soaked, overly-affectionate stoned couples who dance salaciously while obliviously bumping into everyone around them.

Which of these categories do I fall into? I'll give you three guesses.

Here's a video from Iron and Wine's stint. Please, enjoy!

SEARCH THIS BLOG? SURE, NO PROBLEMO, AS BART SIMPSON USED TO SAY....

Recent reviews by Another Portland B.
What's this?